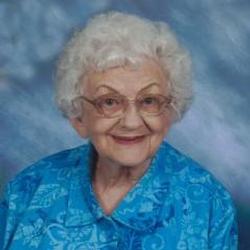 Beverly Elaine Nourse Smtih, 96, a resident of Charleston, TN passed away Saturday, April 18, 2015 at her residence. She was a very active member of Westwood Baptist Church. She was a member of the Phoebe Sunday School Class and also a member of the Senior Citizens Group and served as a greeter at the church. She loved poetry and has written many poems and loved reading literature and writing.

Funeral services will be conducted at 7:00 p.m. Tuesday, April 21, 2015 at the Westwood Baptist Church with Pastor Jim Caywood and Reverend Wayne Finnell officiating. Interment will be held in St. Petersburg, Florida.

The family requests that memorials be made to Westwood Baptist Church Building Fund, 4001 Georgetown Road, NW, Cleveland, TN 37312 or the

Visitation At:
The family will receive friends from 5:00 p.m. to 7:00 p.m. Tuesday at the church prior to the service.