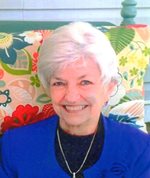 TUSCALOOSA | Patricia Clark, age 73, of Tuscaloosa died October 10 2015, at Hospice. Graveside services will be 2 p.m. Thursday, October 15, 2015 with Magnolia Chapel Funeral Home South directing.
She is survived by husband, Bill Clark; sons Douglas and Phillip; two grandchildren, Taichi and Sota, who live with their parents, Philip and Maiko in Osaka, Japan.
Patricia was born in North, South Carolina and moved to Alabama at an early age.
Patricia has sisters, June and Mazel; plus one brother, Bob, who are survivors and brothers, David, Foster, Nomie, Cirven, Lewis; and sister Helen, all deceased; Patricia's parents, David and Junie are deceased. She has many extended family members living in this area as well as South Carolina relatives.
Patricia's main attributes were love of family, immediate and extended, especially the two grandchildren, love of God and church and her many friends as well as a book of any kind, plus travel of which her husband contended her middle name ought to have been \"Go\". Her outstanding characteristics were her beautiful smile and her famous giggle.


Patricia was retired from the State Public School system beginning her teaching career in Tallassee Alabama and ending as Librarian and English teacher at Stillman Elementary which was her favorite assignment. Her love of teaching was derived from the exposure of her teachers at Moundville Public School noted for its many great teaching role models. Her extended education was from the University of Alabama here in Tuscaloosa where she earned a Master’s Degree.
Pallbearers will be Rick Bartfield, Jody Campbell, Dr. Jason Lueg, John Price, Bob Maddox and Ben Tingle.
Honorary pallbearers are her many teacher friends, members of the many social and professional organizations she belonged to, volunteers at DCH as well as her many high school classmates, plus the loving caregivers at Hospice, Northport Cancer Center and, of course, members of Forest Lake, Moundville Methodist and Taylor's Chapel, her parents
home church.
In lieu of flowers, please make a donation to Hospice of West Alabama or better call and offer your services.