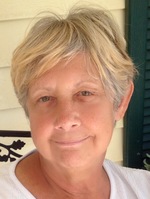 She is preceded in death by her parents James "Buddy" and Mary Ruth Johnston and grandson Christian Gage Wilson.

Deborah was a loving mother, sister and grandmother.