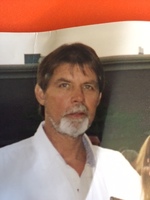 He is preceded in death by his wife, Darla Shelby, father, Dan Shelby, brother, Danny Shelby.

And a host of nieces and nephews.

Paul loved music and playing his guitar. He enjoyed Alabama football, hunting, fishing, and Sunday dinners at Ninney's with the family. He had some bumps in the road over the last few years and had overcome so much when his time on earth had ended. God was done with his story. Three years ago, Paul accepted Christ as his savior, so we know we will see him again one day. But, right now dad is made new. He's perfect and has a new body. He is finally at peace. It's hard to see God in the bad times, but He is there, He is still God and HE IS STILL GOOD. 2 Corinthians 5:17 says: "If anyone is in Christ, he is a new creation. The old is passed away; behold, the new has come." This verse gives reassurance that he is new. He is perfect and we will see him again.

In lieu of flower donations, they can be made to the Haygood Cemetery Fund.
C/o Judy Swindle
19445 Gorgas Rd Northport, AL 35475

The family would like to extend their thank you's to everyone during this trying time. Please continue the prayers in the weeks to come.

Visitation At:
Visitation will be two hours prior to service at the funeral home.