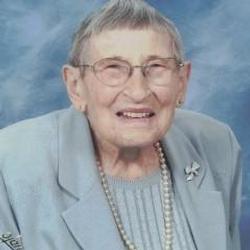 Ann Elizabeth Sanders, 95, passed away peacefully on Saturday, December 27, 2014 in a local healthcare facility. She was a good and faithful servant to her Lord and Savior, Jesus Christ.

She was preceded in death by her husband of 40 years, Guy Sanders and their infant son.

Ann was an active member of Birchwood Baptist Church where she sang in the choir. After church services friends were invited to her home for dinner with her family for, as Ann described it, “rough country cookin’.” She was a great cook. She was a lifelong resident of Meigs County where she and her husband, Guy farmed. Ann was known by many as “the strawberry lady” and worked the fields alongside her husband and even had her own tractor.

After retiring from farming she competed in the Senior Olympics where she won 12 medals throwing the javelin. She also enjoyed world traveling and liked keeping her traveling companions entertained by telling jokes. Ann loved to laugh and loved flowers.

The funeral will be held at 1:00 p.m. on Tuesday, December 30, 2014 in the chapel of Ralph Buckner Funeral Home with the Reverend David Delmotte, the Reverend Gary Powell and the Reverend Luke Buckner officiating. Interment will follow in Lebanon Baptist Church Cemetery with a white dove release ceremony concluding the service. Jack Sanders, Scott Sanders, Charles Murray, Bob Randolph, Patrick Wooden and the Reverend David Evans will serve as pallbearers.