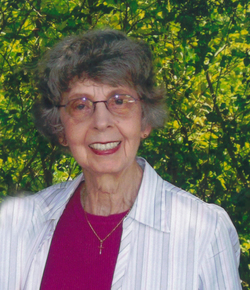 Marjorie R. Elmore, 87, a resident of Cleveland, passed away Sunday, September 20, 2015 in a local healthcare facility. She was a member of Westwood Baptist Church where she was a member of the Phoebe Sunday School Class. She spent 15 years of ministry service at Bradley County Justice Center and was called the “Bible Lady” where she ministered to the female inmates.

She was preceded in death by her husband, James “Jim” Elmore; her son, Randy Elmore; parents, Elias Dykstra and Jennie Dykstra.

Funeral services will be conducted at 7:00 p.m. Thursday, September 24, 2015 in the chapel of Ralph Buckner Funeral Home with Reverend Nolan Phillips officiating. Interment will be held at 10:00 a.m. Friday, September 25, 2015 at the Chattanooga National Cemetery with a white dove release ceremony concluding the service.

The family will receive friends from 5:00 p.m. to 7:00 p.m. Thursday at the funeral home prior to the service.