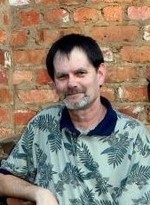 Darrell Terrell of Coker, formally from Caledonia, MS, on April 23, 2015, won his battle with cancer by taking his Heavenly Father’s hand to go home to receive his reward surrounded by his family who loved him dearly. We all know he was met at Heaven’s gates by his parents, Charles and Margaret Terrell; his father in-law and mother in-law, Doug and Joan McGuffin; and his nephew, Blake Terrell.
He left behind his faithful wife of 28 years, Sandy McGuffin Terrell; his sons, C. J. Terrell (Amanda) and Tyler Terrell; two grandchildren, Jessica and Zayne; two brothers, Frank Terrell (Teresa) and Dennis Jackson (Barbara); sister-in-laws, Sherry Butler (Toby) and Lisa Thompson (Grady); nieces, Brandy Holland (Harley) and Laura Beth Butler; nephews, Shaun Terrell (Lindsey), Wayne Johnson (Rebel), Cameron Johnson, and Andrew Butler; and numerous great nieces and nephews, aunts, uncles, and extended family.
Darrell grew up in Caledonia, MS then met the love of his life Sandy whom he married on September 6, 1986. He worked hard all his life to provide for his family. He fully supported Sandy in fulfilling her dream of attending college and following her to Tuscaloosa to pursue her career as a funeral director / embalmer. He was very proud of his Marine, C. J., and his first degree level three black belt, Tyler. Darrell was loving, faithful, caring, and dedicated husband, father, and pawpaw that always put his family before himself. There will never be another one like him and he will be deeply missed.
A celebration of Darrell’s life will be held today at 3pm at Magnolia Chapel Funeral Home North, with Reverend Mel Howton and Wayne Johnson officiating and Magnolia Chapel Funeral Home North directing. Visitation will be from 1 to 3 pm at the funeral home.
Honorary pallbearers are the loving staff at Magnolia Chapel Funeral Homes, Mausoleum, and Cametery; Dr. Tadepalli and Wendy, Ms Bernie, Tammy, Teresa, Cissy, Kristie and the rest of the caring nurses at the Lewis and Faye Manderson Cancer Center; Bailie, Lisa, Whitney, Shon and the rest of the nurses and PCAs of DCH 2 Center; Holly Sullivan, Lisa Camp, Allison Smalley, Chaplain Ron Wilson, and the rest of the caring staff of Hospice of West Alabama; the Caledonia Community; employees of Keeling Company and all of his customers he served while working there; and the staff, instructors, students and their families of Bailey’s Tiger Rock Martial Arts in Northport.
In lieu of flowers, the family request that donations be made to the American Cancer Society or Hospice of West Alabama.

Visitation At:
Visitation will be from 1 to 3 pm at the funeral home.

I really like your blog.. incredibly wonderful colours & theme. Did you make this website oneself or did you use another person to do it in your case? Plz answer as I’m aiming to style my own web site and want to uncover where u acquired this from. many thanks