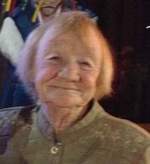 She was a member of Double Portion Church. She was a devoted mother and grandmother, and loved her family and friends.

Visitation At:
Visitation will be one hour prior to services at the funeral home