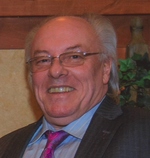 He is preceded in death by his mother and father Neal and Flossy Beck; brother, Mike Beck; and grandparents, Velma Beck and Victor Beck.

Survivors include his two brothers, Wyman and Charlie Beck; two nieces, Amanda B. Fowler (Andrew) and Carla Beck; and numerous friends and family.

Roger gave his life in helping others in his social work and will be deeply missed.

In lieu of flowers, the family suggest that donations be made to the Indian Rivers Christmas Angel Fund.

Visitation At:
Visitation will be one hour prior to services at the funeral home.