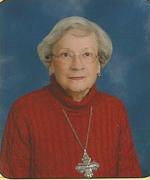 Gloria Hinton Austin of Moundville died April 2, 2015 after a brief illness at home. Services will be held on Wednesday April 8, 2015 at 11:00am at Moundville United Methodist Church with Rev. Tom Terry and Rev. Bill Curtain officiating. Family will receive friends one hour prior to the service at the church. Burial will follow at Oak Hill Cemetery with Magnolia Chapel South directing.

Gloria was born in Tuscaloosa, Alabama. She graduated from Tuscaloosa County High School and married Bill Austin in 1944. They moved to Birmingham in 1953 and lived there for nine years where they were members of All Saint's Episcopal Church. In 1962 they purchased Moundville Motor Company, moved to Moundville, Alabama where Gloria worked as bookkeeper until her retirement.

Gloria was an active member of Moundville United Methodist Church for many years after moving to Moundville.

The family would like to thank Geraldine Bishop for her loving care and friendship in the last years of Gloria's life.

Visitation At:
Family will receive friends one hour prior to the service at the church.