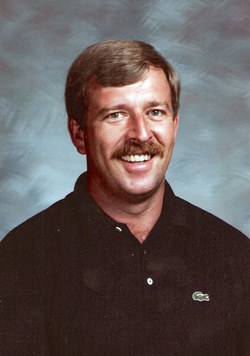 Keith Beaty James Keith Beaty, longtime educator, coach, and lifelong resident of Bradley County, died on Sunday, November 15th, 2015. Keith was the first child of Leon and Mildred Beaty, born on August 17, 1947. He attended MTSU and received a degree in Economics and Finance. He later completed a M.Ed in Educational Administration and Supervision. On August 10, 1968, he married the woman he “fell in love with the moment he saw her,” Vicki Osment Beaty. Vicki loved Keith unconditionally for 47 years and spent the past several weeks constantly by his side as he bravely fought a recent illness. Keith, fondly known as “K.B.”, began his career in 1970 as a teacher and a coach. He was a friend and mentor to students and teachers in Bradley County for over 40 years. While teaching Math, Science and English, Keith coached several different sports including football, girls basketball, track and field, and baseball. K.B. became the head football coach at Charleston High School in 1973. During his tenure, the years were acclaimed by the media as the “Years of the Panthers!”. Taking his team to five post season bowls, Keith was named Sequoyah Conference Coach of the Year and was recognized by Football Time in Tennessee as one of the top five most winning coaches in the state. K.B. had four players named to the All State Football Team: Jay Marshall, Melvin Dunn, Robbie Derrick, and Harry Dillon. Following 10 years as a coach and teacher, Keith became the Assistant Principal of Charleston School and remained in this position until his retirement. Keith never gave up on a student. He affectionately referred to his students as one of “my” boys, girls, or kids. He took them home if they needed a ride, paid for their lunch if they were hungry, and filled in as a parent if they needed one. When Keith and Vicki announced they were expecting, everyone thought Keith would have a boy. Instead, he had a girl that loves football as much as he did, faithfully attended his practices, and took her job as ball girl seriously. Because she turned out to be a lot like him, she always pulled against the team he wanted to win. Keith loved his only granddaughter, Sophia Grace Hildebrand. He taught her many things like how to make frog sounds, build snowmen, properly ride a lawn mower, fly kites at the beach, convince LaLa to smell her feet, shoot water guns, build impressive castles from blocks, save grasshoppers from drowning in the pool, wrestle, call the cows, and successfully stall before bedtime. He loved to take her to the park and aquarium and had a list of places he wanted them to go, including a Walker Valley football game and Hawaii. You always knew what Keith was thinking. He despised shopping, pine needles, people driving while using cell phones, slow drivers, fast drivers, and the football programs of Notre Dame, Michigan, Ohio State, whoever played Tennessee that week, and anyone who messed with Vicki. Keith loved cowboy ribeyes, his mother’s cornbread, Champy’s fried chicken, raw oysters, hot peppers (that he would never admit were hot), Danny’s hot slaw, soul music, talking at Hardees, going to the mountains, riding his four wheeler, playing golf with those not as good as he, and playing cards with friends if he won. Although he claimed to hate politics, he loved to talk about political issues, and loved to campaign with Vicki because it meant they would go to eat afterwards. He also coined the phrase “well, whatever” as the perfect way to win or end a debate. Keith is preceded in death by his father, Leon Beaty. Keith is survived by his Wife, Vicki Osment Beaty; Daughter, Emily Beaty Hildebrand; Son-In-Law, Jason Hildebrand; Granddaughter, Sophia Grace Hildebrand; Mother, Mildred Beaty Maples; Sister Schonna Beaty Morrow, Brother-In Law, Darrell Morrow and Nephew, Alex Morrow. Pallbearers are: Tommy Allen, Terry Beaty, Jimmy Clark, Ricky Cope, Terry Howard, Danny Marr, Charlie Northrup, Carroll Ogle, and Mike Schnell. Honorary pallbearers are Keith’s former football players. Visitation will be held at Ralph Buckner Funeral Home on Thursday, November 19th from 5:00- 8:00 PM. The family will hold a private graveside service. There will be a celebration of Keith’s life on December 1, 2015 at 7:00 PM at Walker Valley High School. In lieu of flowers, the family asks those wishing to honor Keith to make a donation to the Keith Beaty Scholarship Fund, which will be awarded to a deserving Walker Valley student. Checks should be made payable to WVHS/ K.B. Scholarship Fund and mailed to WVHS 750 Lauderdale Memorial Hwy N W, Cleveland, TN 37312. Even though Keith left us too soon, he lived a wonderful, full life. If we should take any lesson from his life, it should be: It is not about winning and losing, but simply how you play the game. Well played, Keith. --

Visitation At:
Ralph Buckner Funeral Home on Thursday, November 19th from 5:00- 8:00 PM. The family will hold a private graveside service.

Funeral At:
The family will hold a private graveside service.