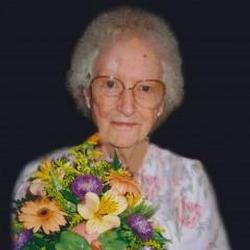 Frances Ona Hughes Beck, 94, a life-long resident of Cleveland passed away Sunday, January 18, 2015 in a local healthcare facility. She was of Baptist faith. She enjoyed watching religious channels on television and having daily bible devotions. She enjoyed piecing and making quilts and loved the Lord and all his wondrous creatures, especially animals and pets.

Graveside services will be conducted at 1:00 p.m. on Wednesday, January 21, 2015 in Fort Hill Cemetery with Mitchell Ferguson officiating. A white dove release ceremony will conclude the service.

The family suggests that memorials be made to Bradley Healthcare Activities Department, 2910 Peerless Rd, Cleveland, TN 37312.

Funeral At:
Graveside services will be conducted at Fort Hill Cemetery