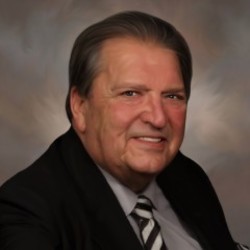 C. Reginald (Reggie) Law is a Cleveland native, with family ties going back many generations. He began his sports endeavors at a young age at Arnold Elementary School, where he played football under coaches Norman “Shorty” Jordan and Lou Underdown. He continued playing football at Bradley Central High School under coaches Billy Frank Smith and Harold “Red” Hensley. Upon graduation from Bradley, Reggie played in the Chattanooga City-County All-Star Game and received multiple invitations to play at the college level. Following brief periods with Northwest Mississipi Jr. College and the University of Arizona, Reggie realized somewhere closer to his Tennessee roots would be a better fit.

At Middle Tennessee State University he interviewed with coach Bubba Murphy and found an outstanding home from 1960 to 1964 where he played the tackle position. During his time at MTSU his teammates included Boots Donnally (NCAA Coach’s Hall of Fame) and Louie Allford. Other highlights during this time included two trips to play in the Tangerine Bowl (now the Capital One Bowl) in Orlando.

Following his playing days at MTSU, he served as a Graduate Assistant Coach while completing his masters degree. At the time he was seriously considering pursuing a career as a football coach. Coaching plans were soon interrupted when he received a promising offer to join the Texaco Inc., where he spent the next 13 years, relocating 11 times. One of these moves landed him as a neighbor to legendary Alabama coach Paul “Bear” Bryant and other members of his staff.

During this time, He married his wife Linda and their daughter Linley was born. He continued to stay involved in sports by coaching Pop Warner football and serving as athletic director for the Sandy Springs Athletic Association. While at Texaco, the entrepreneurial bug bit and soon Reggie found himself purchasing Linley Oil Corporation in Atlanta, which he operated for a number of years before selling the business.

In 1980, he returned to Cleveland, joining Coppinger & Affiliates and beginning a career transition that would take him into world of professional photography. While with Coppinger he served in a number of roles and as special projects Assistant to the C.E.O. until the company was sold in the mid-1990’s. Later, Reggie formed the Law Company, in association with Frames for Portraits, which he continues to operate as a consulting and service group for the professional photography market.

Reggie was preceded in death by his parents, Clarence Cattlet Law and Clemmie Withrow Law.

He is survived by his wife, Linda Witherspoon Law of Cleveland, TN; his daughter, Linley Law and husband, Eric Neff of Newnan, GA.

A memorial service will be held at 1:00 p.m. Friday, June 26, 2015 at Saint Luke’s Episcopal Church with The Reverend Dr. Joel W. Huffstetler officiating.