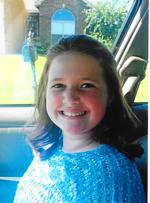 TUSCALOOSA | Emma Kate Jones, age 11, of Tuscaloosa, earned her angel wings on August 22, 2015. Visitation will be Thursday, August 27, 2015, from 6 to 8 p.m., at Magnolia Chapel Funeral Home North. A celebration of life will be 1 p.m. Friday, August 28, 2015, at Buhl Baptist Church in Buhl, Ala. with her uncle Lonnie Marlowe officiating. Burial will follow in Pate Cemetery in Buhl, Ala.

She was preceded in death by her great-grandparents, L.A. and JoAnne Marlowe, Walter Farley, Langston Jones, and Bart and Irene Poe.

Emma was an angel on earth with a contagious smile that captured the hearts of all. Emma was the true example of a perfect child. She was a beautiful, smart, selfless, respectable child with a tender heart for everyone she encountered. Her gentle soul and sweet spirit will forever be missed but her memory will forever live in our hearts.

Thank you for the outpouring of love and support each of you have shown during this difficult time. We appreciate your continued prayers.

In lieu of flowers, donations are being accepted at First National Bank of Central Alabama RE: Emma Kate Jones.