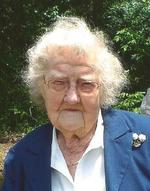 EUTAW | Opal Lamb Mayo, age 99, of Eutaw, died January 25, 2015, at home. Services will be 11 a.m. Wednesday, January 28, 2015, at Beulah Baptist Church in Knoxville, Ala., with Rev. Carl Sudduth officiating. Burial will follow in the church cemetery with Magnolia Chapel Funeral Home South directing. Visitation will be Tuesday, January 27, 2015 from 5 to 7 p.m. at the funeral home.

"Miss Opal", as she was known to most, had a deep love for flowers and definitely had a "green thumb." She was also known for her quilting and sewing abilities. Many friends received a quilt or afghan as a special gift.
She became a member of Beulah Baptist Church at a young age, where she faithfully attended until her health started failing. She loved her church and the Beulah community.

She greatly enjoyed her birthday parties and was planning her "100th" one. She will be celebrating her biggest party yet, up in Heaven. She was dearly loved and will be missed by so many.

In lieu of flowers, the family requests that donations be made to Greene County Ambulance Service, 116 Main St., Eutaw, AL 35461 or Alabama Hospice Care of Tuscaloosa, 3064 Palisades Court, Tuscaloosa, AL 35405.


Funeral At:
Beulah Baptist Church in Knoxville, Ala.