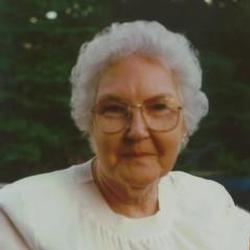 Jane Harrison Jones Anderson, 87, a resident of Cleveland went home to be with the Lord on Sunday, February 1, 2015 at the family residence. She was employed for 49 years as a telephone operator for South Central Bell in Cleveland, Ohio and also in Florida. She had relocated to Florida in the nineteen fifties and had made her home there until her recent illness.

She was a loving person and her sons and grandchildren were her pride and joy.

Jane was the daughter of the late Edgar Harrison and Lora Corvin Harrison; she was also preceded in death by her sister, Anna Lee Denniston; her brothers, Dillard Harrison, Wayne Harrison and Claude Harrison.

Funeral services will be conducted at 7:00 p.m. Thursday, February 5, 2015 in the chapel of Ralph Buckner Funeral Home with Pastor Guinn Green officiating.

The family will receive friends from 5:00 p.m. to 7:00 p.m. Thursday at the funeral home prior to the service.

Visitation At:
The family will receive friends from 5:00 p.m. to 7:00 p.m. Thursday at the funeral home prior to the service.