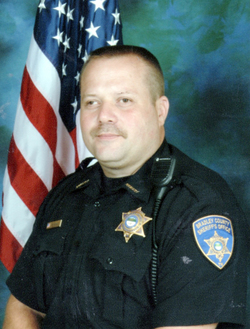 Brian R. McAmis, 46, a resident of Cleveland, passed away unexpectedly on Thursday, August 20, 2015 in a Chattanooga hospital. He was a native and lifelong resident of Bradley County and was of Baptist faith. Mr. McAmis served as a Deputy Sherriff for Bradley County for 17 years. He was a 1987 graduate of Bradley Central High School and served with Blake Gideon as coach for the Southfork Bears football team.

He was preceded in death by his father, Eddie McAmis.

Funeral services will be held at 4:00 p.m. on Monday, August 24, 2015 in the chapel of Ralph Buckner Funeral Home with Pastor Coby Goins officiating. Scott Johnson, Chuck Martin, Jeff Yarber, and Antonio Simpson will also be speaking. Interment will follow in Fort Hill Cemetery. Family and friends will serve as active pallbearers. Honorary pallbearers will be members and staff of the Bradley County Sheriff's Office, former players of the South Fork Bears, Judge Daniel Swafford, and Jason Crye.