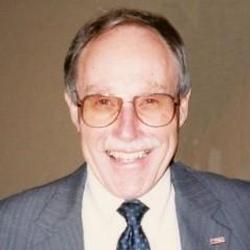 Howard Hill Kuhns, Jr., 90, went home to be with the Lord Monday evening, February 23, 2015. He was preceded in death by his parents, Howard Hill Kuhns, Sr. and Alma Cale Kuhns, and his daughter, Janie Elizabeth Kuhns.

Kuhns graduated from the University of Pittsburgh in 1948 with a bachelor’s degree in accounting and business administration. After completing one year, his college education was interrupted by a 30 month stint with the Air Force beginning July 1943. During World War II he was stationed in India, Burma and China for 22 months, where he served as a member of the well-known 14th Air Force. After completing his service, Kuhns returned to his studies at Pitt and married his high school sweetheart, the former Barbara Beard, during Christmas break of his senior year. The two had grown up together in nearby Edgewood, Pennsylvania.

After working for 7 years in public accounting in Pittsbugh (Arthur Young & Company and Cale Company Accountants), Kuhns brought his wife and first son, Jim, to Cleveland in 1955 to set up the accounting system for the White Wing Publishing House of the Church of God of Prophecy.

Two years later, he applied for a part-time accountant position at Bradley Memorial Hospital and was offered the job. In 1958 Bill Torrence, hospital administrator, offered Kuhns the position of assistant administrator and financial officer. He readily accepted, and thus began a 32-year career in the health care industry. In 1977 Kuhns was named associate administrator of the hospital. In this new role his administrative duties were expanded while he continued to oversee the financial side of the operation. In 1987 he assumed the top administrative post at Bradley Memorial and remained in that position until he retired in February 1990.

Kuhns was a long time member of the Cleveland Kiwanis Club and, along with fellow members Hal Munck and Dr. Harris Pierce, was instrumental in launching the local flag program where more than 300 flags are placed on Cleveland’s main thoroughfares during patriotic holidays. He also served for over 15 years as community liaison, group membership coordinator and executive advisory board member for Blood Assurance. Additionally, he was active in Habitat for Humanity and was a member of the board of directors for United Way of Bradley County. Kuhns was a former chairman of the American Diabetes Association and served on the board of the Tennessee Baptist Children’s Home.

Professionally, Kuhns served on the board of directors of the Tennessee Hospital Association for 6 years. He was a former board member of the Hospital Financial Management Association and served as president of the Chattanooga Area Hospital Council for two years. In 1980 he was accepted as a member of the American College of Health Care Executives (ACHE).

Kuhns was a member of First Baptist Church for over 30 years where he served in various roles including sanctuary choir member, deacon, treasurer and Sunday School teacher. For the last several years he had taught a Sunday School class for First Baptist at Garden Plaza of Cleveland. In November 2013 Kuhns and his wife moved into Garden Plaza and he continued to teach this class up until the Sunday before his death.

Howard Kuhns was a godly man who lived out his Christian faith in all areas of his life. He will long be remembered for his kind smile, generous spirit and godly example.

The remembrance of life service will be conducted at 11:00 a.m. on Saturday, February 28, 2015 in the chapel of the Ralph Buckner Funeral Home with Reverend Kelvin Page officiating. Interment will follow at Sunset Memorial Gardens with military honors.