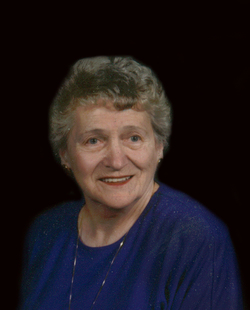 Anne Leska Wingard, 98, of Cleveland passed away Friday, August 14, 2015 in a local healthcare facility. She was born in Chicago, IL and has lived in Cleveland for the past 37 years. She was a member of Good Shepherd Lutheran Church in Chattanooga. She enjoyed gardening, cooking, baking and sewing. She had a love of animals and pets and enjoyed holidays especially Christmas.

Mrs. Wingard was the daughter of the late, Paul Emanuel Leska and Elizabeth Basnar Leska. She was also preceded in death by her husband, George Robert Wingard; son, Allan Dale Wingard, and her seven siblings.

Memorial services in Cleveland will be held at 7:00 p.m. on Wednesday, August 19, 2015 in the chapel of Ralph Buckner Funeral Home with Pastor H. Christopher Sheets officiating. The family will receive friends on Wednesday from 5:00 – 7:00 p.m. at the funeral home prior to the service.

Memorial Services in Chattanooga will be held at 11:00 a.m. on Thursday, August 20, 2015 at Good Shepherd Lutheran Church in Chattanooga, Pastor H. Christopher Sheets will also officiate. The family will receive friends on Thursday from 10:00 – 11:00 am at the church prior to the service.

Funeral At:
Memorial Services in Chattanooga will be held at 11:00 a.m. on Thursday, August 20, 2015 at Good Shepherd Lutheran Church in Chattanooga.