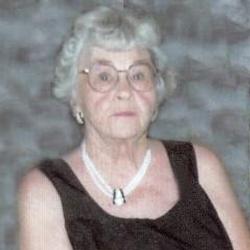 Virginia Jo “Louise” Rogers Hysinger, 87, a lifelong resident of Cleveland, went to be with the Lord Wednesday, February 18, 2015 in a local healthcare facility. She was a member of Big Spring United Methodist Church. She was a former employee of A&C Amusement Company.

She loved cooking for family, attending reunions and yard sales, and spending time with her grandchildren. She also loved attending the YMCA Swimming Classes where she also volunteered in the nursery at the YMCA.

Mrs. Hysinger was the daughter of the late John Rogers and Ethel Hair Rogers and was also preceded in death by her three brothers: Johnny Rogers, Dean Rogers and Dirse Rogers; one granddaughter, Misty Rymer Thompson and son-in-law, Jerry Rymer.